With OSR still topping the league as one of the most financially attractive break crops but establishment becoming more of a challenge, one Nottinghamshire farming business has invested heavily in a new piece of hardware to get the crop in the ground in good time.

Since rape has been grown at Field House Farm, the White family has focused on maximising its rooting potential as a means of extracting the highest yield possible from the crop. While 30 years ago this involved a fairly labour-intensive multi-pass regime – sub-soiling, power-harrowing and then drilling – it’s now evolved into a much more streamlined approach. 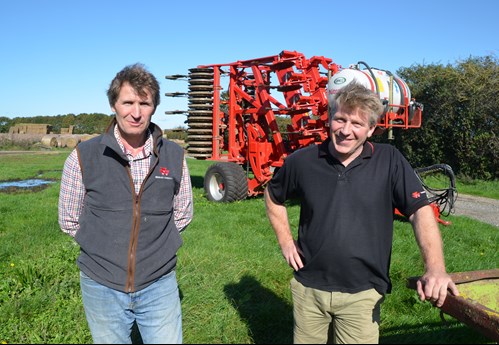 “Our old rape establishment system was incredibly reliable – you knew you’d get a crop every time. But it was also incredibly time-consuming so we weren’t always getting seed in the ground at the optimum time, especially with harvest happening simultaneously,” explains James White.

“So ten years ago we switched to a one-pass approach with a fairly basic seeder unit mounted on our five-leg Flexicoil sub-soiler. It proved to work well in getting rape off to a decent start but it was still slow – it would take two weeks to get 500acres established.”

With the arrival last year of a more powerful Challenger rubber-tracked crawler, an opportunity was identified to speed the job along. For a number of years the Whites had been following the trend towards lower disturbance sub-soiler seeders as a means of aiding in the battle against problem grassweeds. Typically with lower draft requirements this provided the opportunity to go wider and therefore cover more ground with each pass.

“We looked around at the options and felt that being around 300hp, our new Challenger would be capable of pulling a 5m rig. The machine that really caught our eye was the HE-VA Evolution,”

“We liked the concept of having big disc cutting through the trash up front ahead of a low disturbance tine opening up the ground. But the critical part was the fact it has a proper disc coulter with a press-wheel to place seed at an accurate depth.

“On top of that, having the ability to apply liquid fertiliser and slug pellets at the same time really streamlined the job. We were sold on the concept and ordered up an 11-legger.”

The HE-VA Evolution really proved itself in last summer’s ultra-dry conditions. By placing seed into decent tilth and then consolidating it, the coulters generated a decent establishment despite the weather.

“With the cost of seed getting decent soil contact is critical. It means we get really a really decent stand of young plants early on able to stand up to flea beetle, pigeons or stem weevil.

“And being a true one-pass machine it massively reduces our harvest work burden. With fertiliser and slug-pellets all put on at the same time, you drive out of the gateway and the job is done.

“The whole thing is so much more efficient – not only are we seeing our time in the field reduced but there’s also a definite fuel saving.” 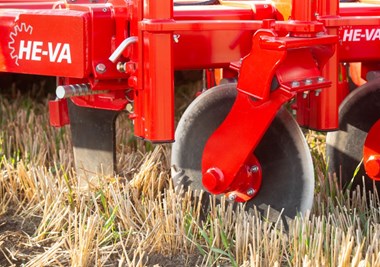 It’s the big sub-soiler’s ability to keep surface upheaval to a minimum that really pays dividends. With discs running ahead of each low disturbance leg the slot opens cleanly and means the soil to either side is left as it was.

“Leaving the majority of the soil surface undisturbed means we simply don’t prompt the blackgrass or broadleaf weeds to germinate. Seeing what comes up in the narrow band behind the legs confirms that – there’s always a decent flush of weeds there but the strong plant stand soon shades them out.

“We’re now using the sub-soiler as one element in our strategy to combat grassweeds. There’s no point growing a crop of rape that will return a whole lot of blackgrass seed to the soil. We now see it as a really good soil cleaning opportunity.”

This minimal disturbance effect has one other significant benefit. Because stubble between the 50cm rows is left standing it makes for a pretty uncomfortable landing zone for pigeons and the Whites believe they’ve seen significantly less damage from the air as a result.

But at the end of the day they’re convinced the critical element is getting the crop off to a decent start. Central to this is the Evolution’s NitroJet liquid fertiliser applicator.

“We’ve always tried to give the young rape crop a bit of a starter boost, generally with a small dose of granular nitrogen broadcast on.

“With the NitroJet it’s sprayed on in a band directly where the plant’s roots are going to explore as they emerge. With a 20% nitrogen liquid, it goes on at around 75-litres/ha but of course because its just applied to the crop rows rather than the whole field surface, the real rate is much greater than that. It really gives the crop a kick.”

It’s this principle of giving the fledgling crop everything it needs right from the beginning in a single pass that has proved to be such a success.

“We’re doing everything we can to make life easy for this critical break crop. We’re opening up the rooting zone, placing the seed at the perfect depth, consolidating it, feeding it and hitting the slugs,” concludes James.

“On top of that we’re making it a hostile environment for pigeons and getting problem weeds under control for the following crop. And we’re doing all that in just one-pass at the perfect time, burning less diesel and putting fewer hours on our tractors – it really is a win-win situation.” 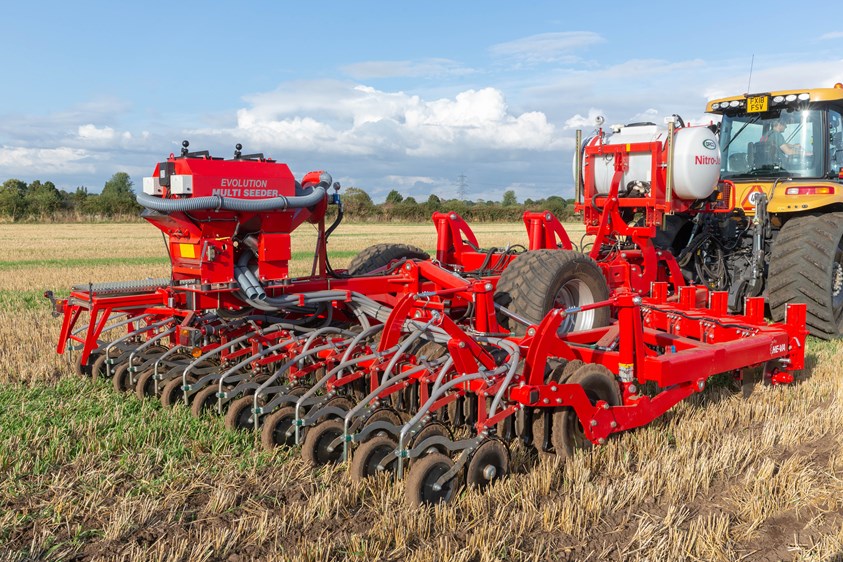