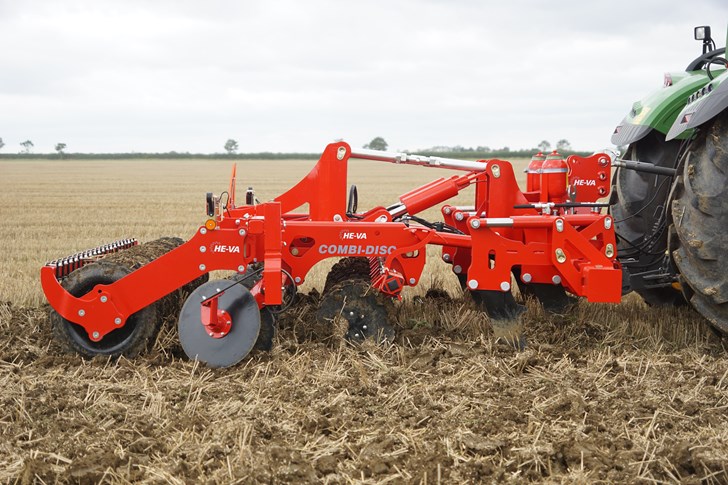 Having manufactured subsoilers, discs and combination cultivators for over a decade HE-VA have brought all their knowledge and experience together in the Combi-Disc.

Designed with the operator in mind, it can be used as a standard subsoiler, or low disturbance subsoiler if fitted with HE-VA Stealth 15mm low disturbance legs and points with the discs lifted out of work, a set of discs with the legs lifted up or as a complete one pass soil cultivator. Furthermore, all of this is possible without leaving the seat of the tractor. Once the Combi-Disc has been set level the first time it’s individual components can all be hydraulically adjusted from the tractor seat allowing minute changes to settings whilst in work.

Whether standard or Stealth, the soil loosening legs on the Combi-Disc are set at 55cm centres and staggered in two rows at 400mm (dependent on model) to allow good soil and residue flow and keep the draft requirement to a minimum.

Unlike traditional concave discs or aggressively angled discs that lift soil and cut out “grooves” forming a corrugation effect under the surface, HE-VA’s DSD, depth synchronised disc, system works to move the whole soil surface and is effective working shallow or at depth. The 510mm Sabre discs pull themselves into the ground which assists penetration meaning more soil is inverted and residue incorporated.

When working shallow the DSD system ensures that the angle of the disc to the soil is vertical which means that the discs push the soil horizontally (sideways) and the whole soil profile is moved. It also shears rather than “scooping” it out like a concave disc working at an angle, this means there is no smearing which creates a disc pan.

When being used as a deep disc cultivator or for residue mixing and incorporation a more aggressive disc angle is required. By increasing the depth of the disc it automatically moves away from vertical using HE-VA’s DSD system which increases the aggressiveness of the disc relative to the soil surface – again ensuring the whole soil profile is moved.

The Combi-Disc provides versatility for smaller farms by being able to perform a number of different jobs from primary to secondary cultivation and from subsoiling to shallow disc cultivating. Equally, for larger farmers and contractors, the trailed folding machines are at home being used as shallow stale seedbed preparation on 180hp tractors or working up to 400mm (16”) deep moving the whole soil profile from the surface down on a 350hp tractor. Adaptability and ease of adjustment are standard features throughout the range.

My details
Back to top

The Subsoiling tines on the Combi-Disc can be used to work down to 350mm (14”) or can be lifted out of work completely and the working depth can be altered on the move. The depth of the tines is controlled by the relative position of the packer roller at the back of the machine.

When designing the Disc Roller the aim of the HE-VA engineers was to produce a machine that could fulfil all the roles that a disc cultivator is asked to. It needed to be able to work shallow to create stale seedbeds at 2 - 5cm and at the same time be able to cut and incorporate crop residues when working deep in heavy soils. The unique DSD system is the way that both aims were achieved. When the machine is being used for shallow cultivation (position 1) the disc is virtually perpendicular to the soil. As the operator adjusts the discs deeper using the tractor hydraulics (position 2) the disc angle automatically increases (see below). 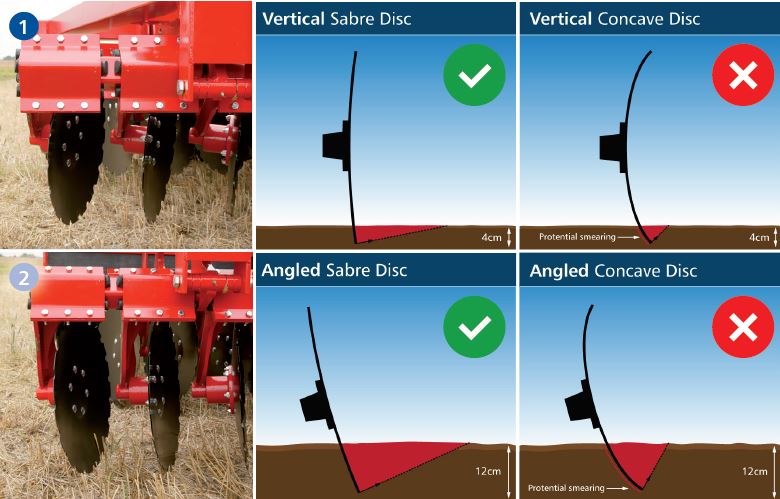 The end result is that the discs pull themselves into the ground more which assists penetration meaning more soil is inverted and residue incorporated. All this happens automatically and hydraulically as the depth of the discs is being altered by the tractor driver.

A traditional concave disc or an aggressively angled disc will lift soil and cut out “grooves” but will not move all the soil surface. At the same time it will tend to smear and seal the worked soil creating a disc pan. - DSD 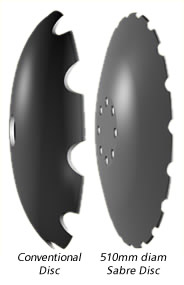 A major part of the development work on the Disc Roller was the optimisation of the disc design. This has resulted in the Sabre discs from HE-VA. Normal heavily dished discs have too much angle and do not overlap enough to cut all the soil at shallow depths.

The Sabre discs shallow disc angle, with its superb cutting action, coupled with the stagger of the two disc rows provides maximum movement and mixing of soil, even at shallow working depths. The other advantage of a relatively flat disc is that it does not smear causing a disc pan in wet conditions, whereas the back of a more conventional concave disc smears the soil as it works creating a pan and causing problems for crop roots and drainage. 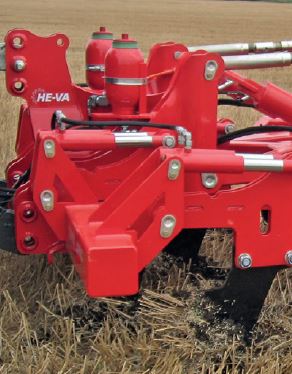 The Combi-Disc’s soil loosening legs can be fitted with on the move hydraulic reset. A pressure gauge allows the hydraulic system to be set according to the working depth and oil accumulators provide temporary expansion room for the hydraulic system when the legs trip. This means that the leg breaks back quickly and is able to reset immediately once it has passed the obstacle.

The sensitivity of the break back system is quickly and easily adjusted by the operator according to the working depth and type of soil. The whole system reduces the amount of lost time due to shearbolt breakages and makes the machine easy and convenient to use.

A shearbolt option is available for larger machines. 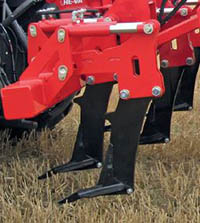 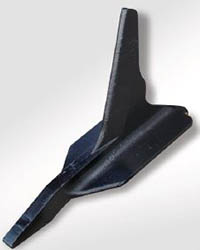 - 420 (dependant on model) to allow soil and residue to flow between them and keep the draft requirement to a minimum.

The standard 25mm Combi-Disc leg is made from Hardox steel to minimise wear. The point itself is made from cast steel which is hardened to prevent wear without becoming brittle. A single bolt located behind the heel of the leg is used to hold the point in place, this makes it a matter of a few minutes work to change all the points on a Combi-Disc.

The Combi-Disc point has been developed by HE-VA through over 10 years experience of subsoiling and soil loosening in a huge variety of conditions all over the world. The experiences of customers each year has lead to continuous evolution of the point to provide the best wear characteristics and yet ensure it gets the job done.

The standard Combi-Disc point is 200mm wide but narrower 80mm and 120mm versions are available as well as a 350mm point. Whilst the 200mm point is suitable for most applications the soil type, working depth and desired end result varies so a simple change of point size will allow the Combi-Disc to suit most applications. 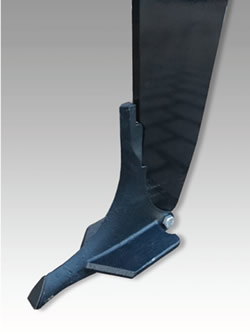 The thinner legs are made from stronger Hardox steel and can be interchanged with the 25mm standard subsoiler legs as necessary. However, it is the point that really makes the difference. The Stealth 15mm low disturbance point has a shallower wing angle and shorter tungsten tipped nose that opens the soil to create drainage without disturbing the whole soil profile.

Like many of the machines in the HE-VA range the Combi-Disc uses the proven pressed steel V profile ring. However, all the rings are mounted on a 150mm solid axle so that each section of the roller turns as one ensuring the machine can continue to work in very wet sticky conditions. Each ring section is castellated ensuring the roller turns in light soils. The aggressive rib and shoulder profile combines with around 150mm ring spacing to leave an excellent consolidated weatherproof finish. Trailed Combi-Discs are supplied as standard with a larger 700mm V-Profile ring packer.

vel finish can be achieved on any soil type. 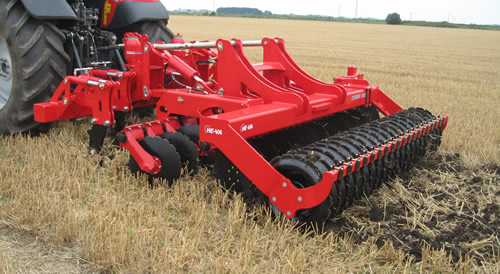 The three point linkage mounted Combi-Disc comes in either 2.75m or 3.25m working widths allowing easy manoeuvring in and out the field and to suit tractors ranging from 170 to 270 horsepower. 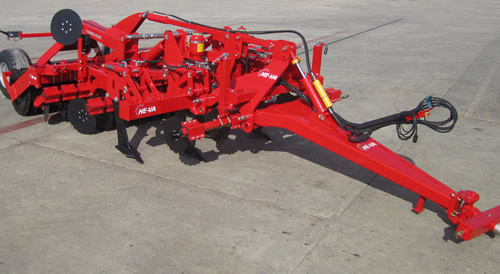 The trailed Combi-Disc is available in 2.75m and 3.25m working width as a non folding machine, 4.25m and 5.25m as hydraulic folding with a transport width of 2.61m and automatic transport locks for safe and simple road transport. 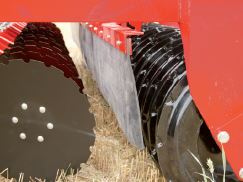 This ensures soil falls in front of the roller to present a level surface to be consolidated. Recommended when fitting a seeder to your Combi-Disc. 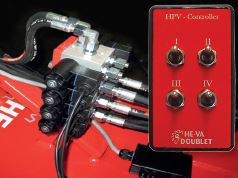 Reduces the number of tractor spools needed by controlling up to four double acting functions. Multiple functions can be activated simultaneously.

It cuts seed rates and establishment costs whilst improving yields - utilise a Variocast to take advantage of Till-Seeding techniques and improve gross margins.

For more information on the Variocast Seeder click here. 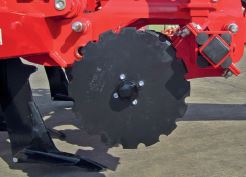 Trailed machines can be fitted with front discs in line with the subsoiling legs to reduce surface soil disturbance. 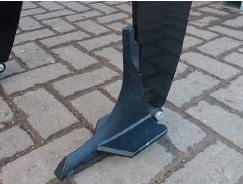 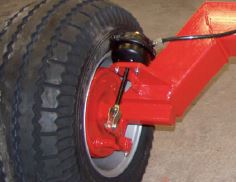 Air braking or hydraulic braking systems are available for all trailed Combi-Discs as a factory fit option.

Options & Accessories
Back to top 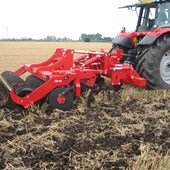 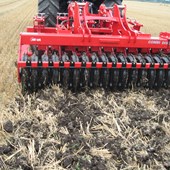 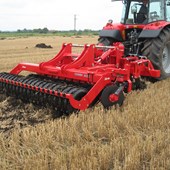 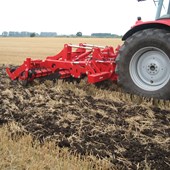 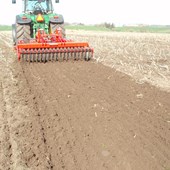 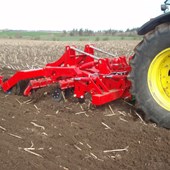 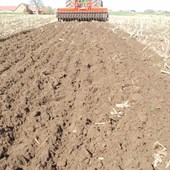 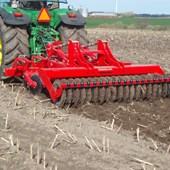 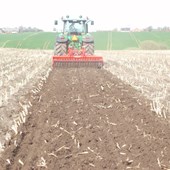